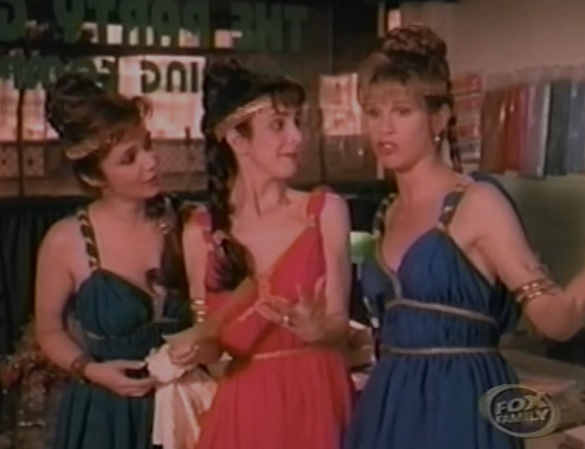 Hello again readers, family and friends.  Today we review the final episode of The Bradys.  It was the first plot that heavily involved Greg’s and Bobby’s wives.  Leah Ayres was also given a lot of screen time in this episode.  She was featured prominently in the previous episode as well.  While she was a fine actress, I can sense some disappointment on the part of fans in that they weren’t seeing the original Bradys.  However, I am sure by episode six, a great number of fans of the original series had checked out anyway.  I know if I had my choice back then, even as a huge Brady Bunch fan, I’d have been watching Full House and Perfect Strangers on a Friday night.  I really wish our beloved characters had a better send off than the hi-jinks of a catering startup.  However, that is what we got and that is what we will be reviewing.  We do have a subplot of a brotherly conflict between Peter and Greg that was well done.  Let us do it one last time with a review featuring (most of) the original cast and start our review of “The Party Girls”! 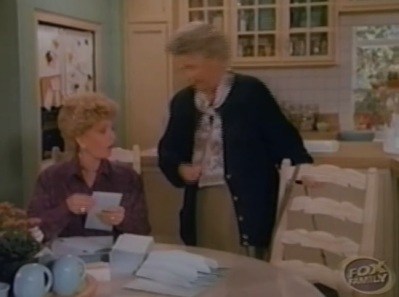 The episode begins with Alice paying a visit to Carol.  Sam is on the verge of retiring and will be putting his old butcher shop up for lease.  Alice would like Carol’s help putting it on the market.  Carol seeks Alice’s help licking envelopes.  Both ladies complain of tongue strain as the envelope glue is hard on their palates.  Through this entire scene I kept thinking “Get a damn sponge or a wet paper towel!  You don’t have to lick the envelopes!”  Surely between the smarts of these two ladies, one of them would have thought of this.

Wally decides to apply for a job he can’t be fired from; he wants to run his own company.  He so enjoyed working for Councilman Brady that he now wants to start his own public relations firm.  Mike makes the ever wise suggestion that maybe Wally should work for a PR firm before trying to start his own.  Wally will hear none of that and wants a loan to start his business.  The fact that Wally had no interest in being employed by a PR firm before starting his own would have nixed any willingness to give a loan from me.  Mike says he will give it some thought.  Maybe guilt motivated Mike to do this, as I can see no good reason to loan somebody money for an endeavor they have so little experience with.  Wally proved himself apt at handling PR, but that doesn’t make him fit to run a business doing it.  The finest mechanic could fail miserably at running his own auto repair shop. 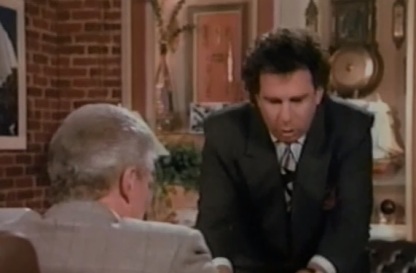 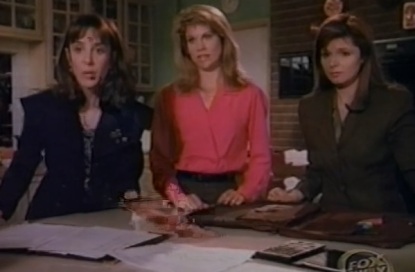 Marcia, Nora and Tracy (Bobby’s wife) have business aspirations of their own.  They want to open a catering business.  They too seek a loan from the Bank of Brady as they hit up Mike and Carol for $30,000 that can be repaid in a year.  Good grief,  a $30K loan is still nothing to take lightly in 2020!  The ladies’ is akin to asking for $60,000 in today’s dollars.  It is not made clear as to whether or not Mike and Carol had this much moula on hand or if they would be taking a loan of their own.  In a resolution similar to what we’d have seen on The Brady Bunch, the girls are granted their loan with the condition that Wally work PR for the catering service.    This is the last episode, so we never know how this worked out in the long run.  But man, can you imagine if Wally wound up getting fired by Marcia? 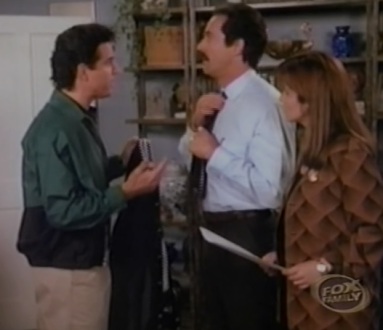 The episode’s other story involves Greg and Peter.  The pair had planned to attend a basketball game together.  However, the night of, Greg must bail on his younger brother and attend a parents event at his son’s school.  Peter is none too happy about this.  Peter claims Greg’s family responsibilities have made his brother less available to pal around.    Peter says Greg being a family man makes him a boring stiff.  Man, Peter gets more unlikable with each episode.  Yes, Greg should have at least given Pete a heads up about not being able to make it to the game, but Peter should not shame his brother for being a responsible dad. 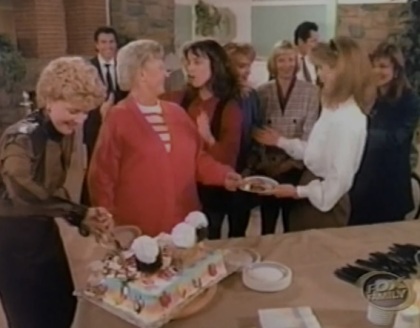 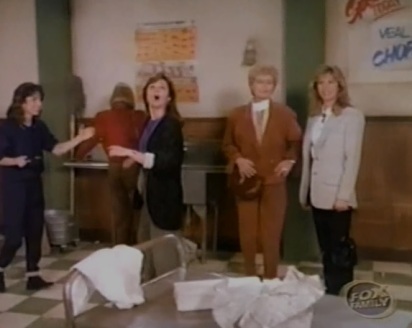 With the wives’ new catering enterprise, we get to see Sam’s butcher shop one last time.  Sam was still using the same style of signage since we last saw it.  Things don’t begin well for the catering business.  Day one ends without the ladies being booked up for catering jobs.  Carol suggests the catering business have a motif for each party to get things rolling.  It does!

Later in the episode, Greg and Peter’s dilemma is revisited as Greg and Nora discuss the brotherly bond that is crumbling.  We are treated to a flashback from Cyrano De Brady as Greg remembers better times among him and Peter.   This was a nice opportunity to give Greg’s wife a little more screen time and see a husband and wife exchange between them. 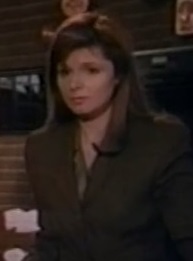 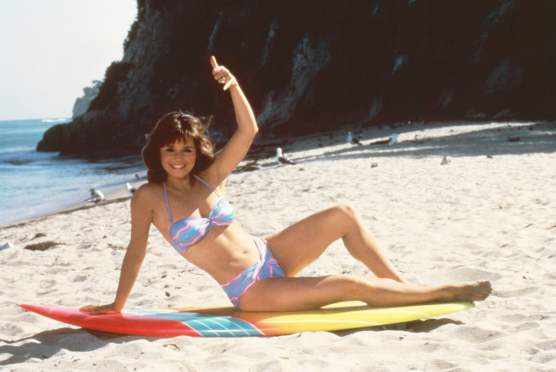 Mrs. Greg Brady was played by Caryn Richman.    Notable acting credits include the soap opera Texas and the starring role on The New Gidget.  Readers, if any of you watched either show and can share some more about her roles, please do!  She has several other TV credits on her resume and a few films.  The internet offers little information about her outside of acting and endorsing products. 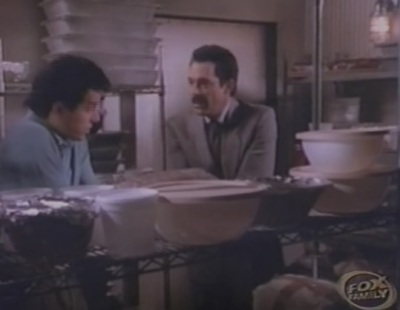 Carol attempts to intervene in the brotherly feud.  She encourages Peter to give Greg a call and mend fences.  Peter does, but Greg is a total ass on the phone, refreezing potentially thawing relations between the pair.  The coldness between them befits the next encounter they have.  They enter Sam’s meat locker to try and hash out differences.  As they do, Peter closes the shop door and traps them both in there!  This time there is no window to break out and they risk freezing to death.  No friends, my mind is going back to the more entertaining show of old again.  Inside the freezer, Greg attempts to make things right with Celtics/Lakers tickets.  Peter declines as he has plans to attend party that same night where twin sisters he has his eye(s) on will be.  Greg is none to happy to be declined. Things almost come to blows inside the freezer.  This encounter ends with Greg saying Peter no longer exists to him!   While this seems extreme, it was nice to have some conflict and interaction among siblings.  A reader made the observation not too long ago how this show was sorely missing that. 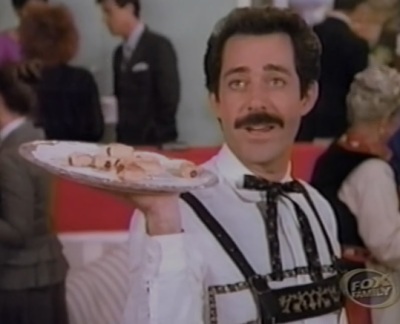 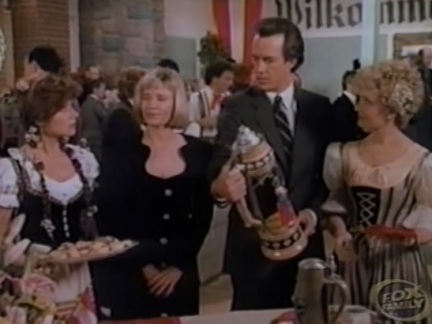 Marcia and the wives conspire to heal the familial rift by having Greg and Peter at the same place at the same time.  The girls are hosting an Austrian themed party to accommodate Mike’s hosting an international dignitary.   The party is going well until Peter starts choking!  Fortunately, Greg is there to administer the Heimlich Maneuver and save his brother’s life.  I wonder if Nora secretly added a choking agent in the delicacies, knowing Peter would nearly die and his brother would be there to save him.  After all, she probably had heard about how Peter indentured himself to Bobby when the younger brother saved his life.  Now Peter can claim both brothers helped him skirt death. Some reference to being a slave for life would have been funny here.  Mike enters with an Australian dignitary, not an Austrian one!  In some writing akin to the show of old, the Australian man is happy to take a break from references to “shrimp on the barbie” and hearing “G’Day Mate”.

Well friends, with this meh episode, the Bradys left our screens for good.  Yes, there have been parodies and cast reunions, but Florence Henderson, Robert Reed and Ann B. Davis would never again play Carol, Mike and Alice alongside each other.  The actors playing the Brady siblings have also never resurrected their roles of old.  There is still some glimmer of hope that at least one more story awaits us.  As each attempt to bring the family back to the small screen withered and died, I kept thinking the same thing.  The original series was very entertaining and brought smiles and joy to so many.  We all enjoyed seeing the cast back together again in their TV movies.  However, that momentum and fun could not be carried over to a successful series.  It’s nice to go back and visit, but you can’t go home again.

Please share your own thoughts!  While this is the final blog post regarding an episode, there will be a few more posted on some other corners of the Brady universe we’ve yet to explore.  Dear readers, thank you so much for revisiting these shows with me.  I have loved every minute watching them, writing these blogs and reading your comments! 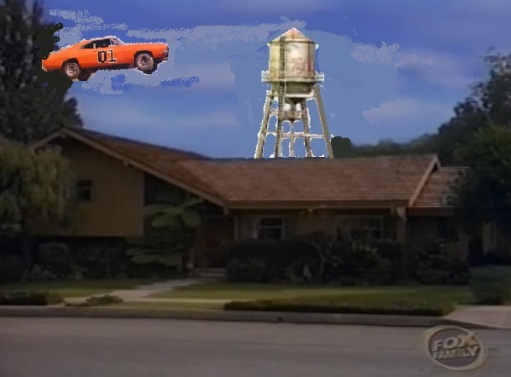