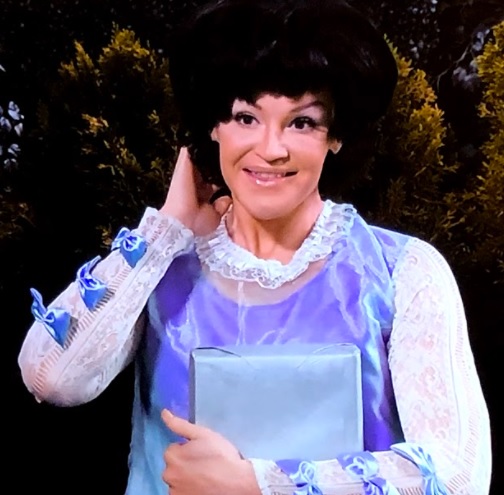 Greetings once again readers, family and friends. Today we take a look at one of the more unique forays into the Brady Bunch universe. Not since the stage show “The Real Live Brady Bunch” has such a strange incarnation featuring the classic sitcom been undertaken. Per an LA Times article from 1992, Schwartz gave his blessing for the stage show to go commercial. What permissions were needed or granted for this reincarnation of “Will The Real Jan Brady Please Stand Up?” are not known at the time of this writing. If some reader out there has some background, please share. I only came to know of this rehashing of a Brady Bunch episode when I received notice that this site’s review of the original episode, had been linked in an online article about the “Dragging The Classics” episode. So friends, let’s have a look at “Dragging The Classics: The Brady Bunch”!

To prepare myself for viewing “Dragging The Classics” I watched the original season 2 episode “Will the Real Jan Brady Please Stand Up?” on Paramount. I was disappointed at the poor image quality and out of sync audio the streaming platform offered. Refamiliarized with the original, I watched “Dragging The Classics” immediately thereafter. With very few exceptions, RuPaul’s cast repeated the episode verbatim! I was expecting extra hammy performances with all kinds of extra comments, remarks and reactions added for modern comedic effect. There was very little of that. It was just the drag queens, mixed with some of the original cast, rehashing the original script.

There were some subtle differences. The sets appear to be chroma-keyed over a green screen with the actors performing in front of it. One would think this would lend itself to all the original scenes taking place in the original rooms from the actual episode. Instead, actions are condensed to the kitchen, living room, Mike’s den, the kids’ bedrooms, the bathroom, Lucy Winters’ porch and the wig shop. The driveway and family room are not seen.

Upon perusing the acting resumes of those not part of the original cast, I found very few familiar titles. Kylie Sonique Love plays Jan. She delivers the lines without much inflection or feeling. They all seemed kind of flat to me. However, even the best actor/actress faces huge challenges playing a twelve year old child.

If a grown man was going to play the role of Carol Brady, I don’t know how anybody could do it better than Roy Haylock (aka Bianca Del Rio). Roy Haylock is a former winner of RuPaul’s Drag Race. Roy Haylock’s performance given in “Dragging the Classics” channeled Carol Brady very well.

The rest of the non-original’s cast was on par with that of Kylie Sonique Love. Andrew Levitt plays Alice, Benjamin Putnam plays Greg, Jaren Merrell is Marcia and Kandy Muse is Cindy. A funny bit occurs as Cindy searches for hair ribbons. The set dressers made the chest of drawers exceptionally tall to accommodate Kandy’s Muses height.

RuPaul herself fills the role originally played by the late Marcia Wallace. The red wig is a nice tribute to the departed actress. The other lady working in the shop, Helen, was played by Michelle Visage. It was during this scene that I noticed the only added line to the script. After the clerk chides Helen for mixing handbags with wigs, Helen says scornfully, “Diva”. The original episode did not include this line and I don’t even recall Helen speaking. Readers, if you noticed any added or omitted dialogue in the episode, please share with us your observation.

As mentioned before, some scenes were relocated. Greg and Bobby play basketball in the living room when Bobby shares that Margie Ripple will be present at Lucy Winters’ party. The exchange ends with Greg tossing the ball with a crash following. I would have bet money that the line, “Mom always says don’t play ball in the house” would be uttered by Bobby. However, “Dragging the Classics” holds true to the original script and the line was not delivered.

The episode’s conclusion gives us the opportunity to see the other two original players’ contribution to this redux. Eve Plumb plays Lucy Winters and Susan Olsen plays Margie Ripple. I must admit, I did not recognize Susan Olsen in the role until I saw her credit on IMDB. That is one fine makeup job! Both actresses come across as enjoying playing these parts decades after the original episode was produced.

Thank you for taking a look at “Dragging The Classics” with me. While it was definitely unusual, I enjoyed what RuPaul and her associates did with the episode. The possibilities for something mocking or crudely parodying the original show are endless, but here the performance remained true to the original script. I am curious to see if more classic TV episodes, be it The Brady Bunch or some other series, get featured in an episode of “Dragging the Classics”. Please share your own thoughts on this reincarnation of a classic episode.

4 thoughts on “Dragging the Classics: The Brady Bunch”